It’s a Nordic palooza of fun tunes. Vidar Skrede, this month’s featured guest at Fiddle Club of the World sent recordings of three tunes that we can play at the session after his concert this Sunday (9/29) at Seman Violins (4447 Oakton in Skokie).

Here they are, straight and simple, with the slow versions offered up by themselves:

For the first batch of tunes from Vidar, click here!

I know this one will be great. I met Vidar Skrede during my visit to Helsinki last fall. He’s a powerhouse of a musician from Haugesand, Norway, now living in Finland. His background is the traditional music from Rogaland (South West of Norway), but he also has a masters degree in Nordic folk music from the Royal Academy of Music in Stockholm. He is best known from his work with such bands as the Dynamo Band, Geitungen and The Secret Carpet Club. This summer he has toured the Midwest in The Blue and the Blonde, a duo with Jutta Rahmel (from Kardemimmit, a quartet featured at the Chicago World Music Fest).

Vidar is a master of both the hardingfele and the flatfele. The first is the eight-string hardanger fiddle that features four (sometimes five) sympathetic that run under the fingerboard. The second is the flat or regular fiddle. His mastery extends to the guitar and mandolin.

But let the tunes speak for themselves. (More can be found on Vidar’s MySpace.)


Reinlender (on guitar; see below for a live version in another key)


Here are a couple of tunes from an incredible session at the Musta Kissa (Black Cat) bar in Helsinki last October. The session was organized by accordionist Tejia Niku, who was a Fiddle Club guest in 2010 with the Polka Chicks. Antti Järvelä (Arto’s cousin) was there with a mandolin. (Antti, any time you want to visit Fiddle Club, just let me know.) Gail Tyler played some banjo uke. I was doing my best to keep up on fiddle as Vidar led the way on guitar.

Johan på Loftet aka John in the Hayloft


Reinlender (guitar; in A dorian, aka 1 sharp)

Open jam this Sunday (9/15) at the Leadway Bar & Grill (5233 N. Damen) at 7 (pm).
Fiddlers and all players of other instruments are welcome. Bring your current favorite tune. 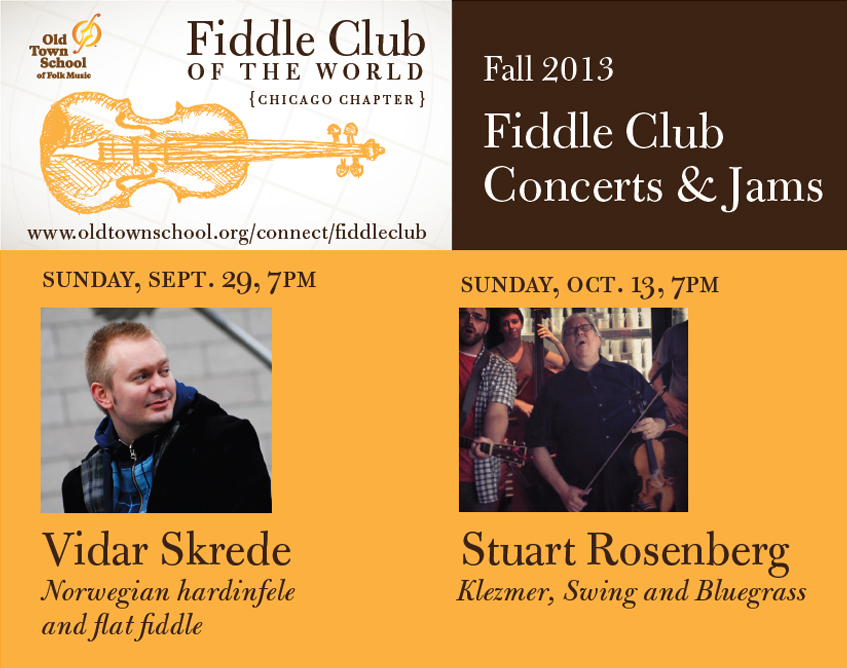 For the most current info and other goodies, check the Fiddle Club of the World facebood page. You do have to be on facebook (You mean you’re not!) and you do have to ask to join. Just ask, we’ll open the door for you. Click here for our facebook page