It’s that time of year when many of us wish we were Irish. That was one of my life goals when I was 15, due in part to a vague notion I had then that traditional Irish music might be found along my pathway to a satisfying and exciting future. 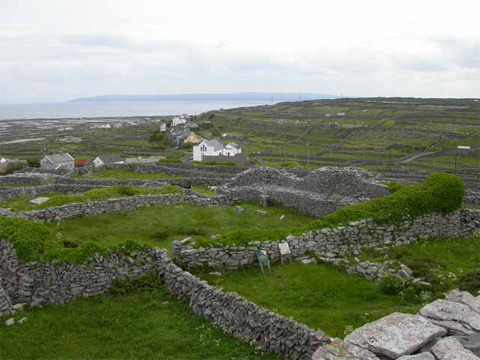 A few years later, at the end of 1969, I made first and only journey to Ireland, including a boat ride out to the Aran Islands off Galway Bay in the West. During my few days on Inishmaan, I tried to attend a dance or find a fiddle player, with no success, due to my own social clumsiness. I did hear a few sean nos (old style) songs at night, sung in Gaelic by one or another old man in an Aran Sweater, while we all nursed a pint in the island’s pub. Meanwhile, the young folks–most home for the holiday from work in England–were having a fine old time dancing away the darkness.

Last fall I had the great pleasure to meet Gaelic scholar, Deirdre Ní Chonghaile at an American Folklore Society meeting in Bloomington, Indiana. We played some tunes together with our fellows, and I had a chance to dance a bit with her. And since, Deirdre is from Inishmore, the largest of the three Arans, I finally fulfilled my 40-year-old quest to dance as they dance on the Aran Islands.

Here is a set of two tunes commonly played together on the Arans for a couple copy. The recording is taken from a YouTube video of a kitchen session in County Mayo with Caomhie Donlon on fiddle, her father Larry on banjo, and Cormac Gannon on pipes. The first tune is a common hornpipe, The Stack of Barley. Deirdre calls the second tune Some Say the Devil is Dead and Buried in Killarney.

The Stack of Barley-Jenny Will You Marry Me